Okay, okay…this is very similar to my other corn quinoa recipe. But, I’m on a quinoa kick. If you’re curious why quinoa has become popular lately, I’ll give you a brief synopsis. First, it has twice the protein of white rice. It also is a complete protein. That means it has all 9 amino acids the body needs. Typically, you find complete proteins in animal products (meat and dairy), or you need to eat a combo of foods to get all of the amino acids. Quinoa is a unique plant product that is a complete protein. That makes it popular amongst those who are moving to a more plant based diet (which is becoming a string movement, partially in thanks to a movie called Forks Over Knives, which I strongly suggest, especially if cancer runs in your family).

While eating my other quinoa recipe, I said, “This would be really good with roasted chiles”. My husband agreed, and this dish was born. If you subscribe to my posts, you’ll notice that oven roasting veggies is a habit of mine. Pretty much anything tastes better roasted, and it’s any easy way to prep parts of a dish while making other preparations.

In this dish, I kept with the southwestern flavor theme by adding a little cumin and browned sweet onions. I also added chicken as an option, for those not yet on board with meatless main dishes. Enjoy!

Preheat oven to 350 degrees. Place corn (still in the husk) and chile on a baking sheet in the preheated oven. Roast for 30 minutes. Turn chile once during roasting. Chile should be bubbled and black in most areas when done. Remove from oven and allow to cool.

While they are roasting, heat olive oil in a frying pan. Add onion and cook until soft and brown. Remove from heat. In a pot, heat chicken stock over medium high heat. Add garlic and heat to boiling. Stir in quinoa and cumin. Cover and lower heat to low. Simmer for 15-25 minutes, or until quinoa is cooked and all of the liquid is absorbed.

Wearing gloves, remove the blackened skin from the chile, remove and discard the seeds and slice the chile into thin strips. Remove the husks from the corn and cut the kernels from the cob. When quinoa is cooked, stir in the onion, the chile and the corn kernels. Add chicken if desired. Salt and pepper to taste, if needed. Serve warm.

In lieu of a written entry for this recipe, I will refer you to this awesome blog post.

Also…I use my food processor A LOT in recipes. Every time I write a recipe that uses my food processor, I think about what I would do without it. I LOVE my food processor. They can be pretty expensive, so when I ran across a cuisinart sale here, I thought I’d post it. If you’re new to the site and join, you get a free $15 credit, which is cool. There are stick blenders, ice cream makers, coffee grinders and all sorts of awesome small kitchen appliances on sale. Check it out. (The cuisinart sale ends in a couple of days, but comes back every few months or so).

Preheat oven to 350 degrees. Place corn (still in husk) and broccoli crowns on a baking sheet. Roast in the oven for 30 minutes, turning the broccoli a couple of times. Allow to cool for 5 minutes. Remove husk and cut corn kernels from the cob with a sharp serrated knife. Break the broccoli into very small crowns, removing excess stalks. I like the broccoli to be as small as possible, without completely chopping it up.

While the veggies are roasting, heat olive oil in a pot over medium heat. Stir in onions and cook until lightly browned. Add garlic and cook, while stirring, an additional minute. Add quinoa, broth and thyme. Bring to a boil. Cover, reduce heat and let simmer for 20-25 minutes (or until all the liquid is absorbed). Stir in corn, broccoli and black beans. Add salt and pepper to taste. This makes a great side dish, or main dish.

Adapted from The Dish on Delish 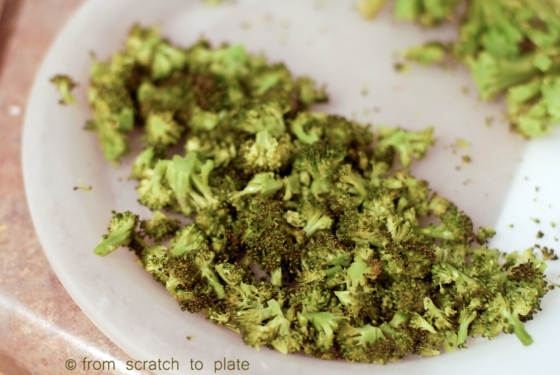